Active engagement with other cultures is the basis for an increasing awareness of social and cultural issues. In an era of globalization, this constitutes an important contribution towards international understanding. 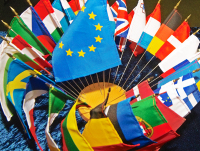 Kaiserslautern is an international city and grasps this internationality as being a great opportunity to strengthen the city for the future. The West Palatinate hub has around 45,000 Americans living in the city and surrounding district, making it the largest American military community in Europe.

Kaiserslautern is home to people from over 140 nations. The close cooperation with other nations in the private economy, as well as in terms of university research, represents a unique opportunity to gain new insights, and thus overcome psychological barriers. Exchanges and collaboration with our 10 international twin towns thus offer regular opportunities to develop "intercultural competences" – from classic student exchange schemes to the conception of international partnership conferences.

After the Second World War, from 1950 to 1955, Kaiserslautern became the largest US military community outside the United States. It was even given its own nickname, "K-Town ", which was used by the Americans as a synonym for Kaiserslautern. Around 49,200 (as of 2011) US citizens and nationals live in the City and surrounding district. Kaiserslautern has active twinning links with Columbia (South Carolina) and Davenport (Iowa).

To promote the coexistence of Germans and Americans, the first German-American Community Office was established in the city center at Lauterstraße 2 (Rathaus Nord) in February 2003.

It is here that you will find the Atlantische Akademie Rheinland-Pfalz e.V.. This cultural institute was founded in 1995 by the State of Rhineland-Palatinate, in order to raise awareness of the links between the European and North American nations through lectures, events and seminars. This institute also runs an American library, which is open to the public.