In order to enable citizens and guests of the city of Kaiserslautern to observe game species that can be found in our hunting-grounds or that were to be found there in former times, the Forestry Office established a game open-air enclosure in the forest department "Alter Schlag" - today known as "Wildpark" - in 1970.

In the course of five years, six large individual enclosures were built, a water line with a length of 1.5 kilometers [0.9 miles] was laid and fodder houses as well as open stables were constructed - all with the own two hands. Browsing areas, water places and wallows were created in the enclosures. The animals should live in nature-like surroundings.

The marvelous 120-years-old tree population - mainly oaks and beeches with added conifers - goes perfectly with the wild animals that show themselves naturally to the visitors under the leaf canopy.

With installation and maintenance of the 62-acre game park at the Betzenberg, the city does not only come up to the wishes of the nature-loving population for observation of wild animals, it also makes a valuable contribution to conservation of the wisent, an endangered species.

A humid biotope was laid out in the wisent enclosures - a perfect place for indigenous frogs and batrachians. At the same time, also a possibility for spawning is given to the European toad, which is living in the surroundings.

A Sunday walk is always worth a while. However, on weekdays the wisents, auerochses, wild horses and further animals can be observed, too. Don't forget your binoculars or camera - it's double fun! 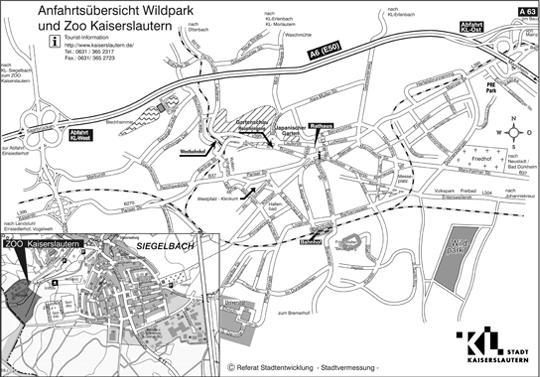